A concept often thrown around in the crypto world is Metcalfe’s Law, which states that the value of a network increases as the number of users increases. A graph comparing the number of Bitcoin addresses (COIN, OTCQX:GBTC) used in the last 24 hours (BAU) with the price (data taken from Blockchain.info) seems to confirm this notion.

In the chart above, the blue line represents the BAU, which reflects the price trend very well. In fact, it appears that a BAU surge preceded Bitcoin’s parabolic rise at the end of 2017. This makes sense because more addresses in use means more people acquiring Bitcoin and sending them to addresses in wallet. Basically, an increase in this metric means more network activity and active users, which is a positive signal for Bitcoin’s long-term health.

The recent decrease in BAU may surprise some readers, as stories about crypto adoption have been in the headlines. For example, IBM has been very bullish on blockchain and the G20 has generally taken a pro-crypto stance. However, it seems that many investors lost interest in the short term, due to reasons such as extreme volatility and the presence of scams in the crypto space. This can be seen by the drastically declining search interest in Bitcoin.

Without widespread interest and investment, there will be more sellers than buyers, as new money is not flowing in, which means downward pressure will be put on the price. Selling pressure will continue to exist from miners, ICOs liquidating crypto to pay for business expenses, and early adopters taking profits. If this pressure is not offset by a rush of new investors, further decline is likely.

The last time the BAU was this low one level was in the summer of 2017 and the price was $3,000-$4,000 per bitcoin. If adoption isn’t growing, that would be a reasonable target for Bitcoin’s price. Although it is tempting to speculate that Bitcoin is an old dinosaur that will abdicate first place in cryptowe actually see the opposite effect happening, as Bitcoin’s dominance has increased, even as its market capitalization has fallen. 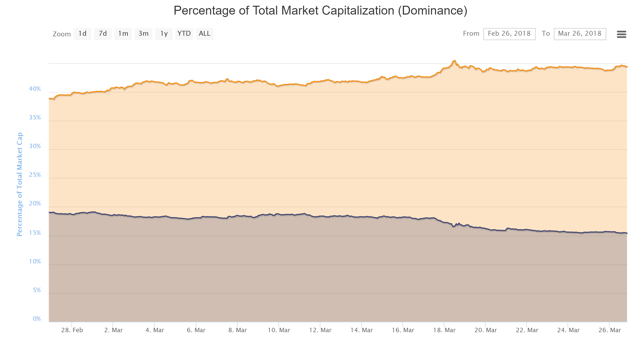 [Bitcoin (light shade) dominance has been increasing, while Ethereum (dark shade) has been decreasing over the past month. Source: Coinmarketcap.com]

Thus, it seems that the adoption of the Bitcoin network cannot be ignored, even for those who are solely invested in altcoins.

We recommend investors understand and carefully monitor the BAU metric for changes. Unless there is a dramatic reversal from the recent downtrend in BAU, selling pressure may continue to dominate to drive down Bitcoin and crypto prices in general. On the other hand, an increase in BAU to record highs could serve as a signal to crypto investors waiting on the sidelines. Such an increase would be a clear sign of investor adoption and interest and could lead to a bull run.